Ricardian contracts have seen many implementations. This page documents some of those, where I've bumped into them and had the time to record and say something. There is no particular order. This description is part of the WebFunds Guide and Ricardian Page within that.

The evolution of Ricardian Contracts has been slow. The concept was announced as far back as 1996, and source code was made available in Feb of 1997 (?), serious and deep interest in how to describe real assets did not arise until Bitcoin.

Guardtime have built a hash notary server concept into a signing infrastructure and then into a distributed ledger using Ricardian contracts: "Assets: can be defined by any permissioned user, they are textual Ricardian Contracts and are represented by the hash value."

Superficially, the KSI blockchain looks like a SOX (or Ricardo) system without the public key cryptography (they use KSI signing which is server-mediated hash-based signing), and without the receipts (they use balances instead). But, more meat required.

CommonAccord is a project by James Hazard and Primavera de Filippi to "create a global template system of codified legal texts" that integrates with smartcontracts. As written by Primavera de Filippi in "Legal Framework For Crypto-Ledger Transactions," the base legal contract element is of the Ricardian form, each of which is matched to a smart contract element, and then the pairs are composed into wider contacts.

This Bitcoin-era system called OpenBazaar expands the more static notion of Ricardian Contracts and creates a protocol of bids and offers to form trades:

OpenBazaar uses Ricardian contracts for managing trade and arbitration in a decentralised pseudonymous marketplace. Ricardian contracts enable tamper-proof and authenticated consensus between buyers and sellers, which can be easily audited by the contracted parties and an external 3rd party. 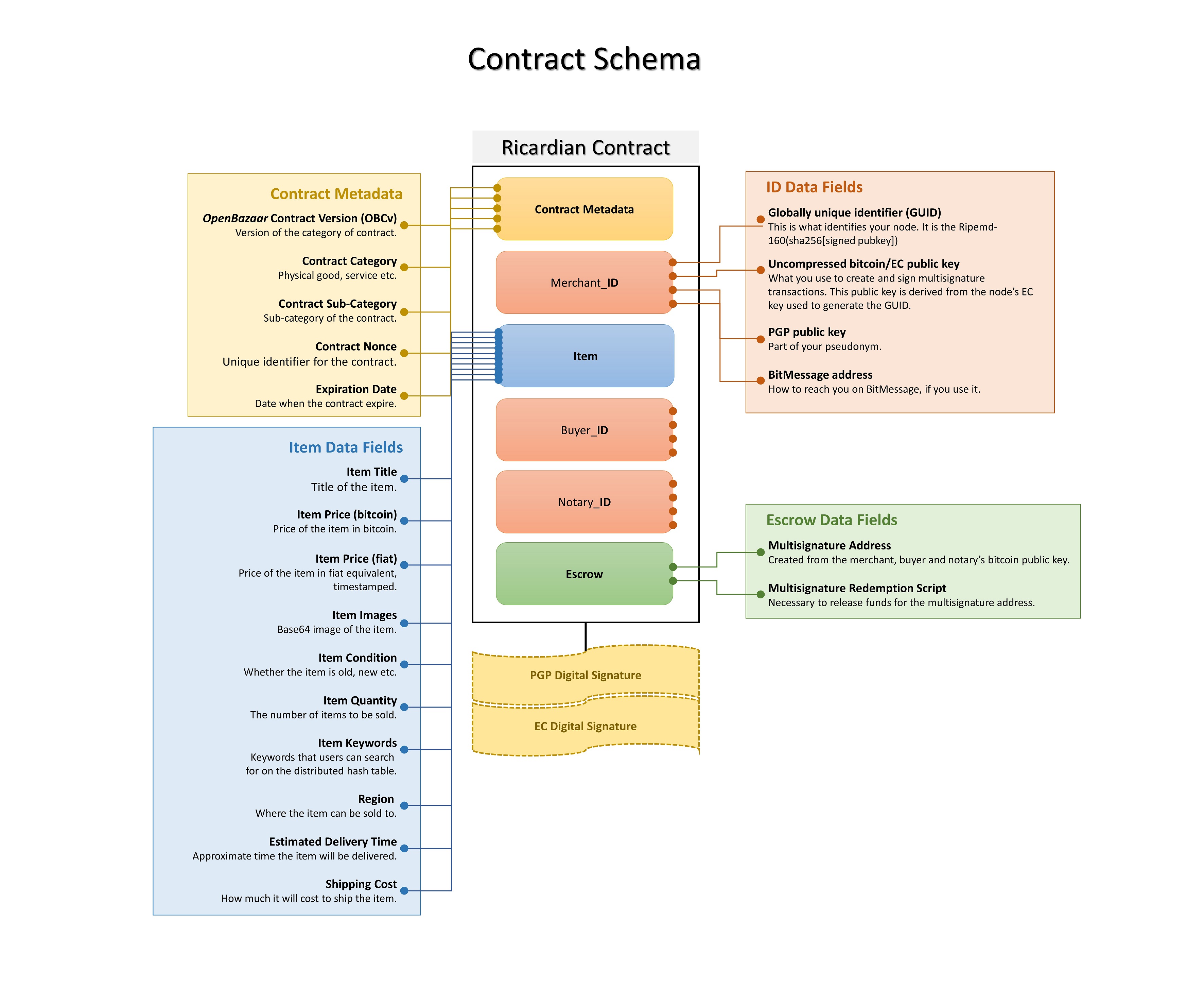 They choose JSON to express the contract writings. They create a series of embedded contracts, reminiscent of the russian dolls of OT. See schema at right, which I borrowed and annotated elsewhere, and this description from @drwasho on how the Ricardian Contracts relate to their identity and reputation system:

This is work by Flavien Charlon and/or Nicolas Dorier.

FreiMarkets by Jorge and Mark

Askemos consists of a set of notaries, being cooperating nodes that securely exchange information. Each notary is instantiated on a 'notary device' being the combined user platform of hardware, software and data. A set of notaries can run an autonomous 'agent' being an operation run by each of them in consensus using byzantine fault tolerance ( Paxos).

In Askemos the presentation of the information can be seen as a Ricardian Contract that can be expressed as an issuance of an asset such as an IPR to photo, although that probably cuts the capabilities of Askemos short.

OpenTransactions uses the Ricardian Contract. Its chosen form is XML, as below.

I originally implemented contracts solely for the issuing, but they have really turned out to have become central to everything else in the library.

That's a sandwich that demands some meat!

In a presentation at EFCE 01 WebFunds programmer Erwin van der Koogh talked about how to map Ricardian Contracts to the XML format.

In brief, the summary was that the equality requirement of the Rule of One Contract was not met. XML is so blase as to the whitespace and layout that there are enough simple tricks there to break the real contract requirement.

It is simply not clear that we can make a contract out of XML that will satisfy initially, a lawyer, and ultimately, a judge. More work required on this front. Note that the example presented here is quite readable and familiar, and may satisfy.

One alternate development is the FlexTicket from NTT.

It was recently described in an Internet Drafts, Voucher definition published by Ko Fujimura < fujimura@isl.ntt.co.jp> and Masayuki Terada (both from NTT, Japan):

This is part of a "generic value circulation system" that is further described in a set of requirements for Generic Voucher Trading:

The notion seems to have been introduced as far back as this 1998 Usenix paper, "General-purpose Digital Ticket Framework".

Do other ideas meet the requirements if the Ricardian Contract? In terms of the contrast between Ricardian Contracts and Fujimura/Terada Vouchers (what this page is more properly about), there appear to be these :

As a contract in the terms that the Ricardian Contract attempts to meet, the Voucher might not succeed. That is somewhat unjust as there is no indication that the requirements of the Voucher are intended to be of a contractual form, merely that they are suitable for describing loyalty systems and ticketing and the like.

However, it may be that we can use the Voucher ID as the starting point for the future XML format for the Ricardian Contract.

One idea that has been around for a long time is smart contracts. These dynamic, coded agents were theorised by Nick Szabo as far back as 1994 which dates it before Ricardian Contracts.

I define a smart contract as a computerized transaction protocol that executes terms of a contract. The general objectives of smart contract design are to satisfy common contractual conditions (such as payment terms, liens, confidentiality, and even enforcement), minimize exceptions both malicious and accidental, and minimize the need for trusted intermediaries. Related economic goals include lowering fraud loss, arbitration and enforcement costs, and other transaction costs.

In a nutshell, smart contracts are pieces of code that are run to interpret and play agent in a protocol that instantiates a contract in action. A vending machine is a smart contract; you put in your coin, and you get your soft drink.

Documentation resources on Smart Contracts include 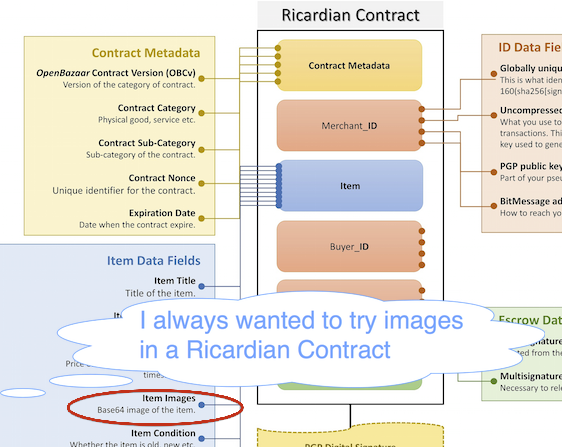 From our present perspective, the biggest question with smart contracts is whether they are contracts at all. That is, do they meet the legal definition of a contract? Can a participating party be made aware of the terms? Or does she need to be a programmer to read the code? Can she enter into a dispute?

It was based on these consideration that the original designers of the Ricardian Contract deliberately eschewed complex notations (such as formal languages) and formats that were only readable by programmers.

In Ricardian Contracts, the most complex extant aspect, and the one that gets closest to smart contracts, is the calculation of the decimalisation of issues. That is, how many cents make up a dollar. As contracts must describe or imply decimalisation to be complete, and clients must interpret this to get basic value calculations correct, this is thought to be a necessary evil.

It's also pertinant to point at the "One Contract" rule. Smart contracts don't really follow this notion. With a smart contract, the emphasis is on the performance, via the code, rather than the dispute, and thus the documentation.

But, it's important to put it in context: Smart Contracts are a much more theoretical construct, heading towards an interesting future. Ricardian Contracts are nowhere near as sci-fi as smart contracts, they represent a half-way house between dumb paper and smart code. They are also here and now, and have been working reality since mid 1996.

A consortium has defined an eCheck format written in SGML (not quite XML) for the purposes of transmitting cheques between parties. These are definately banking cheques, not SOX cheques.

The Document Formatting Rules in the standard may be of interest. It describes characters, tags, lines, and whitespace, all pretty much as we do things.

The rest of the document is not so useful, it includes too many assumptions about cheques and protocols. It's also locked up in PDF and can't easily be worked with.

NeuClear is worth a look:

"A NeuClear transaction is a piece of xml defining a contract that is signed by some one and processed by an independent third party."

The easiest description starts with a blog entry called How does a NeuClear Transaction Work?.

This appears to follow a User-generates model. Each contract is a piece of XML text that a merchant generates. If the user signs it, it can then go to a payment processor for settlement.

This seems quite like the SAXAS model where everyone is a contract writer.

An obvious alternate to Ricardian Contracts is to construct an ontology or dewey decimal style hierarchy of information. This approach is criticised in The Ricardian Contract. But, for what it is worth, here are some efforts in that direction.

OpenFortress is embarking on a signing policy project that promises to investigate the whole space of documents signed in human terms.

What seems odd is that the work makes no mention of Ricardian contracts at all. It even talks about XML signing, and we've been there done that!

A new project offers contracts on the web. Tractis. To be reviewed.

This post references a 1999 paper that suggests 'what you see is what you sign'. That goes some way to meeting our needs. Need to find and read the paper.

SecurityLayer solved questions like "how to sign the Presentation layer." They defined secure document format subsets, so that its possible to formally verify that a document/image/... can be signed securely. The security capsule formally validates that the document actually matches the definitions of a secure document, before it can be signed, and refuses to sign documents, that do not guarantee a secure display with the presentation layer. And luckily they did that with several document formats (HTML, Plaintext, Images, ...)

Here are some english documentation links about SecurityLayer:

Back to Guide Index and Ricardian Page